LONG POST WARNING, PREPARE YOURSELF. IT'S WORTH IT THOUGH.

Today I am proud to present a very special blog. One that I hope speaks to you and more than that, one that sparks a healthy discussion on mental health in the arts.

We are each other, at the heart of it all and only together can we truly change the world. I love and care for you all very deeply, do the same with those around you.

"Blog on meltdowns and emotional intelligence"

Well folks, I know there was a flow of blogs from GFI troops that were coming through on a weekly basis that suddenly dried up. I’ll put my hands up and admit that this is my fault. I was up next but had a wee meltdown so I’ve decided to write about that and how I’m moving forward.

Creatively this year has been really positive and although I feel I should be happy most recently I haven’t. If things are going well then why are you sulking ya big bald pie? Well, below is the loop my brain has been on the last few months.

Two of my closest friends are getting married this year and their stag dos are weeks apart. I can’t let them down.

Need to pick up more overtime. I also have another 3 weddings on top of that to attend to (family and close friends). Can’t let them down.

Need to pick up more overtime. Oh I have 4 birthdays, including my mums, in a six week period. If I don’t want to be homeless... I can’t let them down.

More overtime. Ah, I’ve also signed up for a ton of workshops at The Tron as well as a couple of short films.

Aw naw, I’ve forgotten I’ve promised Tom I’d do work for our next sesh cause we brainstormed on creating some really cool shit this year.

You see I got used to being involved in stuff I forgot to take a step back and actually look at my situation. I was spreading myself far too thin. Heaping a whole load of fuckin pressure on myself and hurtling towards a burn out.

The warning signs were there but I ignored them. Things like being constantly late, losing the plot at folk far too easily as well as starting smoking again On top of that I began getting easily stressed when trying to remember directions and getting lost constantly.

Then, out of nowhere, like a well-placed RKO, my meltdown happened. I had a full blown argument with myself. In my living room, At midnight. Ranting and rambling in the same fashion as those End is Nigh guys on Buchanan Street. Fuck off mate. I know I’m a sinner but just let me get mah Steak Bake and Orange Lucozade in peace will ye.

I was having a right proper go at myself about how much of a loser and a failure I had become. Comparing myself to all my peers and getting angry that I hadn’t finished simple tasks, like a blog. How I was only good at letting people down.

After lying in bed for what felt like an eternity it struck me why this had happened.

Irish satirist Blindboy Boatclub, one half of The Rubberbandits (fucking hilarious by the way), has been very vocal about his battles with mental health and contributes a lot of his ongoing recovery to a technique called Emotional Intelligence.

In its simplest form its being able to identify your emotions, why they’re happening and from there knowing how to move forward and get back into a positive headspace. I was beginning to feel incredibly overwhelmed with everything that was going on in my life. This feeling then led to feelings of frustration, anxiety and anger. The last time I had felt like this was my last year of Uni.

Once I made this connection a plan formed.

The next morning I was upfront and honest with Tom about how I was feeling. He reassured me that everyone in our industry goes through these feelings and told me to forget about the blog and just focus on me.

I decided that day that I was going to take a step away from a few things and start clearing my schedule a bit. I sent a polite email to The Tron apologising that I wouldn’t be able to make any of the workshops that week. Already I began to feel better.

Once I had sent the email I set myself two small manageable goals for the next 10 days:

Once I get on top of those I can then set more goals.

Also I’ve only smoked the one fag in the last week.

I’ve one more day of filming left on a short film and once I’m done I’ve decided I’m no longer going to apply for projects till my head is less fried.

Am I giving up?

I’ve got enough work to catch up on to keep me busy for at least the next month. Whether it’s developing my own stuff or going to events at The Tron I’ll keep plugging away until my plate is nearly empty.

Until I’ve done that I don’t feel that I’ll be comfortable to take on anymore projects. I feel this step back is for the best as I don’t want to go back to arguing with myself in my living room at midnight.

Bald people have a bad enough rep as it is.

Thankfully not as bad as gingers.

Also feel free to watch this 10 minute clip of Blindboy giving a talk on Emotional Intelligence to get a better understanding of what I was trying to say. 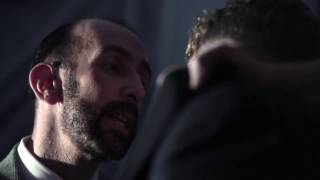 The Actor's Showreel: your questions answered

Picking a Monologue and Sourcing Materials for Performance

Howl of a Christmas